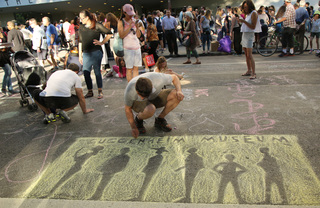 Time flies, and before you know it, June will be here. That means one of the most anticipated museum festivals is making its return to the New York apartments on the Upper East Side — the legendary Museum Mile Festival, taking place on June 11th from 6:00PM to 9:00PM:

“The annual Museum Mile Festival offers free admission to some of the world's finest art collections during extended evening hours. The nearly 30-block stretch of Fifth Avenue is home to eight participating institutions.”

Those institutions, in case you weren’t aware, include the Africa Center, El Museo del Barrio, the Solomon R. Guggenheim Museum, the Metropolitan Museum of Art, the Cooper Hewitt Smithsonian Design Museum, the Jewish Museum, Neue Galerie and the Museum of the City of New York. It’ll be fun times, and in addition to getting to view the exhibits at these stunning institutions, they’ve got some intriguing live performances planned for you as well. Today, we’ll be taking a glimpse at what’s in store, and providing you with all you need to know to head down to Museum Mile and have a great time.

A Bit About the Museum Mile Festival

Dubbed “New York’s Biggest Block Party,” the Museum Mile Festival is now in its 41st year, and has blossomed from its humble origins in the 1970s. When it was first conceived, MMF was aimed as “an initiative to spur the development of new museum audiences and to increase support for the arts during the fiscal crisis of the 1970s,” and when that very first festival occured in 1978, it was an off-the-bat success.

Doing more than just sparking an interest in New York City’s elite cultural institutions, Museum Mile Festival brought together the varied cultural groups who call the city home. “From the barrios of East Harlem and the townhouses lining the Upper East Side, to the winding streets of the Village and the clustered neighborhoods of the outer-boroughs, people came to celebrate their shared pride in their city,” and the rest, as they say, was history.

The Museum Mile Festival has now expanded in its reach, touching more than just New Yorkers, and brings together both New York Natives and interested tourists from across the country. This year, like many before it, will be jam-packed with excitement, and a great chance for you to get out, explore, and interact with plenty of like-minded enthusiasts who appreciate the celebration of our wonderful culture.

More About the Participating Museums

There will be eight museums participating in Museum Mile Festival this year. While the particulars about the special events going on at each haven’t been revealed as of present, we can provide you with a quick overview on what each of these institutions is all about.

Once known as the Museum for African Art, The Africa Center is all about “increasing public understanding and appreciation of African art and culture.” As a large and highly diverse continent, Africa has much in the way of cultural contributions to share, and the diaspora of the African people have helped evolve their artistic expression in ways that have touched nearly every part of the modern world.

Sometimes referred to affectionately as just “El Museo,” El Museo del Barrio is a locus for Latin American and Caribbean art, and, in particular, the artistic contributions of Puerto Ricans and the large community they have within New York City. Their collection dates back more than 800 years, and contains more than 6,500 pieces that cover paintings, sculpture, photography, and more.

Museum of the City of New York

The Museum of the City of New York, as the name suggests, covers the history of New York City and her residents, and does its best to preserve and protect the rich culture that NYC has helped to foster. Among the many wonders you’ll find inside, “New York City at Its Core,” an account of New York City’s complete history, may be one of the most stunning.

As the very first Jewish museum in the United States, The Jewish Museum on Museum Mile oldest and largest collections of Jewish art and artifacts outside of Israel. Their collection contains more than 30,000 items, which cover not only the history of the Jewish people, but also their influential contributions to cultural expression throughout the years.

This museum is one of the three Smithsonian facilities in the City of New York, and one of nineteen under the umbrella of the Smithsonian Institution. The Cooper Hewitt Smithsonian Design Museum contains a collection of works dedicated to both historical and contemporary design, which span a period of more than 240 years in total.

Most folks just call it “The Guggenheim,” and this museum is known far and wide for its ever-growing library of of Impressionist, Post-Impressionist, early Modern and contemporary art. The building, designed by Frank Lloyd Wright, is about as unique as the artworks that are housed within, and add to the allure of this one-of-a-kind institution.

With a focus that’s strictly on early twentieth-century German and Austrian art, you might at first think that the Neue Galerie doesn’t have much to offer. That assumption would be off the mark, however, as this institution holds an expansive selection of high-priced paintings, some of which have been acquired for upwards of $100 million.

The Metropolitan Museum of Art

Known across the country as just “The Met,” The Metropolitan Museum of Art is perhaps New York’s most famous museum, and one of the largest. It’s collection has more than 2 million items, and draws in millions of visitors year after year.

When you call fabulous city apartments like Renoir House home, you do so knowing that you’re among the finest that the Upper East Side has to offer, and in a community that places resident luxury and convenience second to none. Ready to live amongst a “classic” kind of style? Check out what Renoir House has to offer you today, and prepare to experience Manhattan the way it was meant to be.