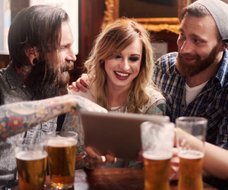 It’s no secret that New York City has a unique history laced with bars, taverns, and legendary dives. The city is home to a plethora of historic bars, and while residents of the apartments for rent in Manhattan know these spots pretty well (frequenting them on a regular basis), there are times when they also like to head out into the city and experience something new.

Thankfully, that’s not too tall an order, since New York is a city that’s in a constant state of evolution. New establishments pop up all the time, and even just a few months into 2018, there are some fresh offerings for you to check out, if you’d like. Today, we’ll be diving head first into some of these new watering holes, so read on to discover what you should add to your “must hit” list.

Located on DeGraw Street, this new establishment might not have a full bar (only beer, wine, and malt beverages), but they make up for that apparent lack of selection with top-notch entertainment: indoor axe throwing. The so-called Axperts “will teach the basics in about 10-15 minutes and then you will get to compete in some fun games against your friends (or enemies).” It’s great fun for family, friends, work buddies, and, of course, big celebrations like birthdays, bachelor parties, and the like. Don’t forget they got a shoutout from Seth Meyers on live TV.

A return to old-school form located on West 31st, Gibson & Luce takes its name from former LIFE magazine editors Charles Dana Gibson and Henry Luce, and resides in the cocktail bar area of the Life Hotel. The buzz here is that this spot is “rumored to have once been a speakeasy for magazine staffers during Prohibition,” adding to its charm and mystique. This will be a trip through history right in Midtown Manhattan, filled with fine drink and against the background sounds from the bar’s turntable and vinyl collection.

Over on West 10th Street in the West Village, Due West is a new and notable establishment who claims it’s “not your average gastropub.” Born from the minds of Jess Goldfarb and Camilo Viafara, they’ve got their own specialty cocktail program, and even received a shoutout from Downtown Magazine: “The cocktails are splendid with a wide range of seasonal selections like the Old Diablo, or should you dare, build your own Old Fashioned, you can mix and match spirits to your own liking. The beer is curated by Camilo; he focuses on domestic and small producers.”

The Brooklyn Heights Social Club, located on Furman Street, are champions of fine drink. Champagne, campari, gin, vodka, rum, tequila, and whiskey cover their many offerings, and the setting, the 10th floor of 1 Hotel Brooklyn Bridge, grants views of the city that make drinking with friends and fine company a true delight. You’ll definitely want to check out their fruit-infused drinks, they use high-quality organic ingredients to spice up the flavor and deliver cocktails that are out of this world.

Head over to Flushing Avenue in the heart of Bushwick, and you’ll find Brooklyn Cider House, a Basque country-inspired establishment housed in a former warehouse. Founded by “two siblings and a friend quit their jobs to grow apples, make cider, and share their love of food, life, and drink,” this new hotspot has come a long way since it was just an idea in the trio’s minds, serving up apple-based delights along with fabulous five-course meals and even some scrumptious vegetarian options.

What could a converted clothing factory on West 36th Street have to offer? Head to what is now the site of the “subterranean cocktail and piano bar,” Bo Peep Cocktail & Highball Store, and you’ll quickly learn. This space draws inspiration from the tailor’s fitting room that once existed there, decorated with plush red velvet, printed wallpapers, and a bare made from the old tailor’s work table. It’s not just looks that will entice you here, though, the fine cocktails and small plates, accompanied by the soulful touch of the piano’s ivory tones bring the experience together.

This spot, Rose Gold Cocktail Lounge, has its home on Morgan Avenue, and has been newly renovated to better incorporated live bands and hip dance parties. The vibes are strong, with patrons loving the energetic atmosphere, and the drink selection is nothing to sneeze at either. House specialties like the Hot Jungle Bird will have you tasting rum in a way you might never had imagined possible, all while the steady sounds of your favorite live acts permeate the evening air.

Coffee house by day, cocktail den by night, Patent Pending on West 27th Street grants visitors the best of both worlds right in NoMad’s Radio Wave Building. As a former residence of famed inventor Nikola Tesla, they’ve got plenty of Tesla-inspired drinks categories on the menu: “Energy,” “Vibration,” “Frequency,” “Descent,” etc. The ambiance is similarly indicative of a mad-scientists hideaway, with plenty of leather and exposed lighting to complement the wild and creative atmosphere. Head here if you’re feeling a bit more quirky than usual.

Ophelia
Housed on the 26th-floor rooftop of historic Beekman Tower, Ophelia, on Mitchell Place, inherits a space once frequented by jazz-greats like Miles Davis and Frank Sinatra. As such, the art deco influences and design touches are in full-effect, evoking an early 20th Century feel that cannot be denied. You’ll delight at the pristine views of the city while sipping on martinis, old-fashioneds, and other assorted cocktails, and perhaps pair your drinks with some food from their 5-star menu.

When You Reside In The Apartments For Rent In Manhattan, New Bars Are A Common Sight

Since you’re right in the middle of all the city’s action, you’ll be seeing new establishments pop up with great frequency, and when you’re living at fine communities like Renoir House, you’ll be doing so from the comfort of fabulous living spaces and creature comforts that exemplify what being in New York is all about.