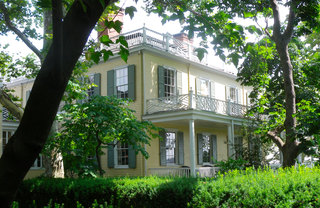 Talk to just about anyone living in the New York City apartments for rent and they'll be able to tell you some basics about Gracie Mansion, like the fact that it's the official residence of the Mayor, that it was built way back in 1799, or that it's sitting pretty over in Yorkville, overlooking the East River as a symbol of what ties New Yorkers together:

"Gracie is also a wonderful place to bring New Yorkers together. Whether hosting spoken word, dance or a fast-paced game of soccer, Gracie comes alive when filled with conversations and laughter. And that’s what makes Gracie so special—our fellow New Yorkers."
There's more to this old abode than meets the eye, however, and if you think that New York's "Little White House" was always known as such, then we've got something in store for you. There are stories about this place that not everyone has heard, and today, we're going to dive into some of those lesser-known facts surrounding this famous property's history, a few of which might just amaze you.

It Was Once Privately-Owned Merchant's Home

Gracie Mansion was constructed in 1799, by Archibald Gracie (from which the house takes its name). For a time, a prosperous merchant, financial woes forced Gracie to sell his house in 1823, to a new owner — Joseph Foulke. Foulke held onto the grounds until 1857, when Noah Wheaton purchased the mansion. It wasn't until 1896 that the City of New York would gain control of the grounds, appropriating it due to non-payment of taxes.

The Gracie Mansion Is Where the New York Post Was Founded

As a connected businessman, Archibald was known to socialize with New York's elite. One such evening, after the mansion was completed in 1801, Gracie hosted a party of sorts for associates like John Jay and Alexander Hamilton. It was here where Hamilton began recruiting investors for the then New York Evening Post (now simply known as the New York Post), with Gracie signing on as part of the endeavor.

Gracie Mansion Has An Unusual Connection With Alexander Hamilton's Death

Speaking of Alexander Hamilton, after his duel with Aaron Burr (which he tragically lost), he was taken to the Bayard House on Jane Street in the West Village. He died in that house, in front of the fireplace. What's the big deal, you might ask? That same fireplace would later be taken to Gracie Mansion and installed in the Ball Room, years later in 1966. Talk about coincidence!

After the City of New York took control of Gracie Mansion in 1896, they worked it into park of the East River State Park (which would later be renamed Carl Schurz Park, in 1910). As a part of the park, Gracie Mansion was used as the public restroom and as a concessions stand for ice cream and other treats. It served this purpose for 28 years, until the City finally came up with a more suitable role for the property...

In 1923, New York decided to make Gracie Mansion the location for the Museum of the City of New York, and it would remain as such until the museum relocated to a new, more permanent home on Fifth Avenue in 1932. From then until the early 1940s, it served as a "historic house museum," but Parks Commissioner Robert Moses was successful in convincing city authorities that it should be the official residence of the Mayor of New York City. In 1942, Fiorello H. LaGuardia became the first Mayor to use the Gracie Mansion for this purpose, and the "Little White House" tradition began.

Interestingly, LaGuardia at first had no desire to move to Gracie Mansion. It was standard practice at the time for the Mayor of New York to stay at their personal residence, and LaGuardia was plenty comfortable at his East Harlem apartment. Following the attack on Pearl Harbor, though, the aforementioned Robert Moses reasoned that might not be the safest idea, and pushed for the move on the basis of "national security." Living on the outskirts rather than in the middle of the city would make evacuation easier in case of Nazi bombing, Moses concluded, and eventually, LaGuardia relented. It was a begrudging move, though, as LaGuardia is quoted as remarking, "my family is not keen about it, and it has no personal advantage for me."

The Gracie Mansion has been a tradition for Mayors since LaGuardia first resided there, and has seen the arrival and departure of William O'Dwyer, Vincen R. Impellitteri, Robert F. Wagner Jr., John Lindsay, Abraham Beame, Edward Koch, David Dinkins, and Rudy Giuliani. When Michael Bloomberg become Mayor in 2002, however, he opted not to live there, instead staying in his Beaux-Arts Town House on East 79th Street. He only used Gracie Mansion to host events, and believed that the "mayor should pay for his own housing somewhere else," and "not take one of the great houses of [the] city away from the public." While Bloomberg may have broken the streak of Mayors staying at the Gracie Mansion, he did help raise funds to help renovate it, and to make it more accessible to the people as a museum and public space.

Plan a Visit From These New York City Apartments for Rent

Did you know you can reserve a tour at the Gracie Mansion? Slots fill up fast, so you'd do well to book a time well in advance, but once you're on the list, you'll find it's a snap to get there from the lovely community at Renoir House — just two miles north and easily accessible regardless of what form of transportation you prefer. Just another fabulous facet of living at these legendary, luxurious apartments, and all the more reason you'll want to call them home. Come enjoy the classic Upper East Side apartment experience, see what Renoir House can offer you today, and drop us a line to learn more about making a move to these dynamic residences.