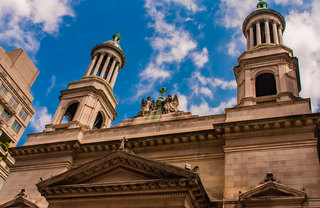 Deep in the heart of New York City, near some of the most splendid apartments for rent in Manhattan, you'll find an old Catholic church affiliated with the Archdiocese of the city. This isn't just any old Catholic church, though, we're talking about the famous St. Jean Baptiste Roman Catholic Church on Lexington Avenue, a site with a rich history and deep ties to some of New York's immigrant communities. What's the deal with this storied religious institution? That's exactly what we plan on taking a look at today, as we explore the history and significance of this church throughout the years.

The parish of the St. Jean Baptiste Church was first established in the late 1800s, and consisted almost entirely of New Yorkers of French descent. Believe it or not, there was a time when roughly 11% of the New York population had French ancestry, and, as was common for the time, they formed their own congregation.

Though they first operated out of a rented space above a stable, the growth of the church necessitated a building of their own. Several locations filled the role, until the early 1900s, when they established their new home, the building we now refer to as St. Jean Baptiste Roman Catholic Church.

It's one of the few Catholic churches within New York City to have a dome (and a rather nice looking one at that). It's architect, Nicholas Serracino, also won a design prize for his work on the impressive structure. The building was completed in 1913 (for a cost of $600,000), and it remains the home of the congregation to this day.

Though still largely faithful to its original design, there have been renovations at St. Jean Baptiste over the years. The interiors were modified during work in the 1950s, for example. There were also a series of renovations that took place at the property in the late 1980s and early 1990s.

Curiously enough, this church has also been the location of more than one crime scene and several suspicious scenarios. A police shootout took place mere years after the church's construction, and in the late 80s, crumbling stones fell from the facade of the church onto the sidewalk below (luckily, no one was injured). In spite of the odd happening here and there, though, the church is still going strong, and remains a city landmark worthy of your attention.

History Surrounds the Apartments for Rent in Manhattan

If it seems like cultural treasures are all around amazing Upper East Side residences like Renoir House, that's because they do. This quiet neighborhood enclave is home to more than just a bit of stunning New York history, and that history adds an unparalleled touch of character the the atmosphere you'll experience at these fine apartments. It's further enhanced by a unbeatable sense of style and contemporary design, culminating in the quintessential New York living experienced. You'll have to see it for yourself to truly understand, though, so why not take the next step? Learn more about what Renoir House has to offer you today, and prepare to make your move to one of the most coveted locations in the whole of Manhattan.