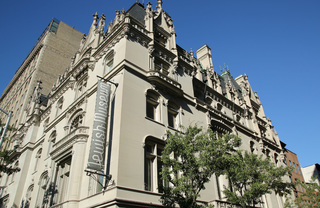 There are actually several “Jewish Museums” on Manhattan within striking distance of the Upper East Side Apartments for Rent, but only one holds the distinction of being called “The” Jewish Museum. Located on Fifth Avenue, part of New York’s legendary Museum Mile, this institution is famed for its showcasing of Jewish culture and fine art:

“Founded in 1904, the museum was the first institution of its kind in the United States and is one of the oldest Jewish museums in the world. Devoted to exploring art and Jewish culture from ancient to contemporary, the museum offers diverse exhibitions and programs, and maintains a unique collection of nearly 30,000 works of art.”

This Spring will be the perfect opportunity to head down to the museum, check out a few exhibits, attend a class or performance, and, in general, have a blast. Today, we’ll be filling you in on what you need to know to make the most of your visit(s) to this venerable establishment.

What The Jewish Museum Is All About

As mentioned in the quote above, The Jewish Museum was established in 1904, with their collection being housed at the library of the Jewish Theological Seminary of America. Mayer Sulzberger donated the original collection of ceremonial art to the organization, at which time the idea to form the museum came about, and they set about in earnest to expand their cache of various works of art.

It remained there for more than 40 years, before finally being opened up to the public in 1947. They moved to a former family mansion, donated to the museum by Frieda Warburg, the widow of philanthropist Felix Warburg. This beautiful chateau at the corner of Fifth Avenue and 92nd Street has been the home of The Jewish Museum ever since, and it’s where you can head to today to check out their collection. Throughout the years, the mission of The Jewish Museum has remained steadfast:

“The Jewish Museum is dedicated to the enjoyment, understanding, and preservation of the artistic and cultural heritage of the Jewish people through its unparalleled collections, distinguished exhibitions, and related education programs.”

To that end, The Jewish Museum has amassed a sizable collection of works, nearing some 30,000 objects across the fields of painting, sculpture, works on paper, photography, installations, media, archaeological artifacts, antiquities, and ceremonial objects. They’re often on display at the museum, and you need only take a look at their current exhibitions page to see what’s up for viewing at present. Speaking of which...

What’s at The Jewish Museum This Spring

Currently, there are three exhibits on display at The Jewish Museum. Two of these are ongoing: Scenes from the Collection (a rotating display of objects and artwork from the Museum’s collection) and Archaeology Zone (an interactive exhibit that gives kids a behind the scene look at the field of Archaeology). One, however, debuted back on April 12th and will only be available for viewing until September 8th: the Leonard Cohen exhibit.

Officially titled Leonard Cohen: A Crack in Everything, this is perhaps the first exhibit of its kind, dedicated completely to the legacy of international icon and songwriter Leonard Cohen, and his contributions to the worlds of music and poetry. Cohen, as the exhibit clearly states, “was an extraordinary poet of the imperfection of the human condition, giving voice to what it means to be fully alert to the complexities and desires of both body and soul.” In this display, a wide range of artists will be visible, displaying their original works that have been inspired by Cohen’s life:

In addition to the art of these talented creative minds, you’ll also hear covers of Cohen’s songs done by some of the greats, including “Lou Doillon; Feist; Moby; and The National with Sufjan Stevens, Ragnar Kjartansson, and Richard Reed Parry, among others.” This exhibit has already made quite the splash, having been covered in The Guardian back in late April. According to Claudia Gould, The director of the Jewish Museum, this exhibit is nothing, if not deeply emotional:

“The first time I experienced A Crack in Everything in Montreal, I walked in apprehensive. All of this work was commissioned and with commissions you don’t know how it’s going to come out. But by the time I walked out, I had tears coming down my face. It was very moving.”

And there are more incredible exhibits coming down the pipe, like Edith Halpert and the Rise of American Art, set to debut in October. These exhibits alone are plenty of reason to add The Jewish Museum to your list of places to see this spring, but you might also want to check out the various programs they have going on as well.

Chief among these programs are the regular talks, performances, and workshops the museum holds, like the upcoming duo of Israeli pianist Daniel Gortler and celebrated Brazilian violinist Daniel Guedes on May 16th, or Meredith Monk (and her vocal ensemble), who will be performing on May 23rd. You can take a look at the Spring Brochure here, and plan out which events you’ll find most appealing. Don’t forget there are also plenty of other programs for children and families alike, so there should be something the whole gang can agree upon and get involved with!

Getting There From the Upper East Side Apartments for Rent

At fine apartments like Renoir House, you’re right in the neighborhood to experience all the Upper East Side’s greatest wonders, and treats like The Jewish Museum are just a few blocks down the road for you to enjoy anytime. Being part of the fabric of the neighborhood has other perks as well — the shops, the restaurants, and even easy access to other great Manhattan neighborhoods like Midtown and the Financial District. Your favorites are never far out of reach at Renoir House, so check out why they call this “classic New York,” and claim a slice of this luxurious living for yourself!