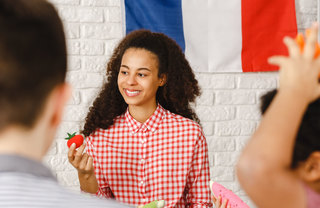 If you call the luxury Manhattan apartments on the Upper East Side home, then you may have heard all the recent buzz about the creation of a Little Paris within the confines of the island? If you’ve been out of the loop for a while, the long story made short is that the co-founders of Coucou French Classes, Léa and Marianne Perret, have started a petition to rename what’s currently referred to as North of Little Italy (NOLITA) to Little Paris, citing the sizable French community there:

“New York is home to about 60,000 French expats, and over 81,000 French speakers. French people and culture have long played an important role in New York...Today still, New York’s French deserve a home, just like the many communities that get to celebrate their cultural heritage by calling a neighborhood their own. A place whose name reflects its status as a vibrant hub of French food, goods, and culture.”

And what a vibrant culture that is. The French influences in New York City can’t be denied, and today, we’re going to be taking a closer look — at both Coucou French Classes case for establishing a Little Paris, and the wealth of French culture you can currently find while roaming the streets of New York. Chances are, there’s more than you might have expected.

The Coucou French Classes Petition and Manhattan’s Claim to Frenchness

Perhaps the greatest thing about the petition that Coucou French Classes started is the fact that they aren’t taking themselves too seriously and they’re staying plenty realistic about their goals. While the broader objective is to establish a Little Paris neighborhood, they know they’ve got to start with something attainable, and so, have set their sights on their block, the area around 253 Centre Street, co-named to Little Paris Street. This is a pretty good starter goal, according to Coucou, not least of which is because the area is already “home to an impressive number of French business and has a fascinating French history.” There’s already a French connection here that you may never have realized:

“Today’s French businesses on and around our block reflect a very French history in the area. In the late 1800s, part of what we now call SOHO was a flourishing “quartier français.” According to 1870s press, the people are nearly all French. French too is the language of the signs over the doors and in the windows.”

And that’s just the tip of the iceberg. Coucou French Classes goes on to note that “on our block, specifically, at Centre and Grand, there was a hill called Bayards Mount, named after the revolutionary-era French-American William Bayard (Bayard was actually a close friend of Alexander Hamilton, and after Hamilton’s infamous duel, he actually died at Bayard’s house!).” Nearby there’s famous Lafayette Street (named for a French revolutionary war figure, Gilbert du Motier, who was the Marquis de Lafayette. They even called attention to a building that sits across from Coucou. It was once the NYPD HQ, and it looks suspiciously French — because the architects who designed it all studied in france, taking the Hôtel de Ville as a prominent influence in its creation.

So, it seems the area really was a burgeoning French Quarter, and with the amount of French businesses that are still around today, it makes for quite an interesting visit, should you take a trek to the intersection of SOHO and NOLITA. Next we’ll take a look at what the area is like today.

Checking Out Some French Establishments in the Neighborhood
The obvious first example would be Coucou French Classes themselves. The New York location also serves as their headquarters, and they hold classes 7 days a week, bringing a bit of culture to the citizens of New York and helping anyone who’s interested learn a bit of French.

Beyond Coucou, though, there’s a wealth of French cuisine to explore around these blocks. Most who venture here know that Maman, the French Bakery, is a local favorite thanks to its flawless treats and international appeal:

“maman brings to life childhood favorites, both savory and sweet, from the south of france and north america. the dishes focus on the highest quality, locally sourced ingredients and highlights twists on classic french techniques. the menu changes every day to ensure an inspiring, ever-evolving menu.”

And in addition to the decadent bakery, the local wine spot, La Compagnie des Vins Surnaturels brings the full measure of Parisian charm and delightful french wine right to Manhattan. They’ve got a full wine list that spans over 600 different bottles, so having choices is definitely part of the experience here. That experience, according to most, is a combination of quaint, unpretentious, welcoming, and elegant.

For a slightly different take on the French cafe/wine bar experience, there’s also Troquet, which is also a plenty suitable choice if you want to grab a French-inspired bite to eat. Options are numerous here, but you’ll do well with delectables like the Croque monsieurs, duck confit, and expansive charcuterie trays.

The influence of French culture goes even further than delicious food and language schools. Among the other French businesses and boutiques in the area, there’s Clic, the gallery and general store. It’s here you can track down all manner of chic artwork, decorations, books and more that will look perfect within your apartment, all the while enjoying some riveting conversations with the staff about interior design or whatever other creative topics fit your fancy.

Next Time You Head Out From the Luxury Manhattan Apartments

Consider heading up to what might well become Manhattan’s new Little Paris. When you call fine communities like Renoir House home, getting around the city is a snap, and exploring the wealth of cultural diversity around Manhattan — from the classic to the modern and beyond — is something you’ll become accustomed to quickly. Learn how you can make this your everyday Manhattan experience. Learn more about what Renoir House has to offer and take the next step to making these lovely residences your new home in the heart of the city.