Met Museum of Art This Summer 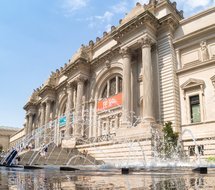 Whether you’re a longtime resident of the Manhattan apartments or not, there’s a good chance you’ve heard the name “Metropolitan Museum of Art.” Affectionately known as “The Met,” this is America’s largest art museum, and one of the many prides of the city of New York. It’s an institution unlike any other, home to thousands of pieces from throughout the ages, and a recipient of millions of visitors year after year.

This year, like many before, The Met is doing big things for the summer months, beckoning even more art aficionados and lovers of culture to grace its doors. There’s going to be plenty for art lovers of all interests and age groups, so if you’re interested in taking a quick break from the heat to stroll the collections, you’d do well to scout out what’s going on beforehand. We’ve got you covered there, as we’ve got the lowdown on what’s going to be of interest throughout the next couple of months.

Which Exhibits Should I See?

The Met is well-known for having an expansive collection that shows off the very best of human creativity. The number of choices can, at times, seem overwhelming, but this summer there are eight highlights you should be sure to check out, all of which you can take a closer look at on the museum’s Current Exhibitions page. They are as follows:

Like Life: Sculpture, Color, and the Body (Closes July 22nd)

Let’s take a look at these in a bit more detail, shall we?

Painted in Mexico — This exhibit takes a look at the 18th Century works of Mexico, focusing primarily on paintings, and features some 110 different works of art. Many of these are unpublished, some are newly restored, but all explore “the most important artists and stylistic developments of the period and highlight the emergence of new pictorial genres and subjects.” Highlights from this exhibit include works like Antonio de Torres’ “Assumption of the Virgin,” “The Adoration of the Kings with Viceroy Pedro de Castro y Figueroa, Duke of La Conquista,” by Nicolás Enríquez, and another work by the artist, “The Marriage of the Virgin.”

Like Life: Sculpture, Color, and the Body — This exhibit is taking a look at nearly seven hundred years of the tradition of sculpture, covering a period from the 14th Century onward, and exploring its featured works in the context of the “narratives of sculpture.” Throughout this exploration, they ask some poignant questions, chief of which being “just how perfectly should figurative sculpture resemble the human body?” While your mileage may vary on that particular query, what’s not in question is the skill of the artists on display. Rodin, Degas, El Greco, and many others will be the highlight of this exploration of amazing masterpieces.

Public Parks, Private Gardens — There was a period of time, during the 19th Century, when paintings of the outdoors were all the rage. This exhibition takes a look at this period, specifically in France, and tackles the reasons why this era of artistic expression gave rise not only to a respect for the outdoors, but the styles of Naturalism, Impressionism, and Art Nouveau. You’ll find 150 works from over 70 artists here, “extending from Camille Corot to Henri Matisse.”

Visitors to Versailles — You’ve heard of the Palace of Versailles before, correct? As the Met puts it, the stunning grounds “have attracted travelers ever since it was transformed under the direction of the Sun King, Louis XIV,” and this exhibit highlights the experiences of the many notables who graced its confines. “royalty, ambassadors, artists, musicians, writers, scientists, grand tourists, and day-trippers,” all marveled at its splendor, and when you see the works on display here, you might find yourself with a similar level of respect for the famed location.

History Refused to Die — The African-American experience is one of pain and struggle, but also hope and triumph. This exhibition “presents thirty paintings, sculptures, drawings, and quilts by self-taught contemporary African American artists,” all a representation of the American South during the 1900s, and emblematic of the period of black identity during post-Reconstruction through the Jim Crow era.

Obsession: Nudes by Klimt, Schiele, and Picasso — This exhibit brings the focus to three of the school of Paris’ most well-known notables, showing their representations of the human form laid bare. There are some fifty works, all from the Met’s Scofield Thayer Collection, and they bring with them equal parts intensity, originality, and unbridled eroticism. For fans of such works, this is sure to a be a thrilling show.

Heavenly Bodies: Fashion and the Catholic Imagination — A peculiar title, but one that sums up the content of this exhibit perfectly. Heavenly Bodies will be showing off the fashion of Catholicism, with its centerpiece being “papal robes and accessories from the Sistine Chapel sacristy, many of which have never been seen outside The Vatican.”

Huma Bhabha: We Come in Peace — This is a site-specific installation for the Met’s Iris and B. Gerald Cantor Roof Garden. It features the work of Huma Bhabha, a Pakistani artist who “addresses themes of colonialism, war, displacement, and memories of place.”

The Manhattan Apartments Are All About Style and Culture

At least, when you’re living at places like Renoir House. Much like the museum itself, this fabulous rental community has its fingers on the pulse of what looks great. Step inside any of the elegant living spaces and you’ll see a level of design that rivals whatever other trendy space you’d like to compare it to. Modern kitchens, baths and barnwood-style flooring, plus a touch of flair that simply screams “New York” make this the place to be for the quintessential New York City living experience. Check it out, and see why Renoir House has made a name for itself as one of the finest places to reside within Manhattan’s beautiful Upper East Side.