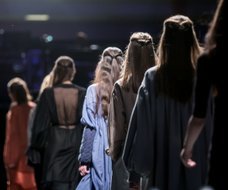 New York Fashion Week, the semi-annual crème de la crème of style and taste, will be kicking off this February. For residents of the luxurious apartments in Manhattan, this is an opportunity to see the grand works of the world’s most notable designers, up-close-and-personal as their models hit the runway at Spring Studios on Varick Street.

Fashion aficionados don’t need to be told how big a deal this event is, but they might be looking for some insights on what will be going down at this February’s showings, which is where we come into play. Read on, as we break down the sights and wonders of this highly exclusive display.

First things first, let’s tackle some of the general details about the show. According oth NYFW press release from early January, the show will take place over the week of February 8-14, 2018. The bulk of the shows will be held at Spring Studios, and a few additional shows will be held at Industria.

It’s important to note that those dates apply to the women’s portion of the show, and the Men’s Fashion Week events will take place from February 5-8. You can get a better idea of the schedule and projected calendar of events by checking out the Fashion Week Online calendar here.

The list of shows is long, and will include designs from Dion Lee, Gemma Hoi, Noon by Noor and more. You can see the official designer listing here, and stay abreast on all the official New York Fashion Week information by keeping your eyes on NYFW.com along with @NYFW on Instagram, Facebook, and Twitter.

Like the any big event, there has been some interesting news in the days leading up to the main show. One of the biggest pieces of news is that a few designers are shaking things up by rescheduling their shows. As reported by Page Six:

“In a move that rocked the fashion world, Alexander Wang recently announced his shows will be staying in New York, but showing in June and December. Rodarte, Tommy Hilfiger, Thom Browne and Proenza Schouler all defected to Paris, London and LA.”

The sudden change, according to the article was prompted by the fact that the “designers did not like losing Bryant Park,” the once-upon-a-time location for New York Fashion Week events. The perception is that now the event, as a whole, is less glamorous and more decentralized, not living up to its former glory. Beyond that, though, Vogue reports that, for Alexander Wang, at least, the switch to a June/December schedule will allow the designer to:

“Realign his production strategy to do more drops, or smaller product deliveries. It will eliminate the need for four collections per year, but will also leave room for more collaborations and partnerships. In other words, his fans will be able to get more stuff more often.”

Wang’s move seems to hold a lot of sway as well, since there are a number of so-called “younger brands” intrigued by the idea and contemplating giving it a try. Then there are other designers who will be staying in New York for February but adopting their own “off-brand” approaches, away from the main runway.

Victoria Beckham, for instance, will be hosting “mini shows at the James Burden Mansion on the Upper East Side” instead of tackling the main event, but will be back on the runway when London rolls around in September.

Then there are a few designers who have pulled out of showing in public altogether, like Karen Craig, and more notably, Georgina Chapman. As Vanity Fair reports:

“The Marchesa designer and estranged wife of Harvey Weinstein has decided to forgo her planned runway show on February 14 in favor of a digital presentation.”

And the list of shake-ups goes on. Vogue also noted that Lela Rose will be planning an Instagram-only show, taking “10 of her favorite influencers and bloggers to model one look each from the Fall 2018 collection, which they’ll style and share on their respective Instagram pages on February 8.”

A quote from Rose, brings up an interesting point: “As our brand is evolving, we felt the need to connect with consumers in a different way,” she told Vogue. Perhaps this is applicable, in some ways, to the fashion world as well? Could it be that shows like New York Fashion Week are now at a point where they’ll have to adapt the way they go about things, lest they face irrelevance?

That might be a process that’s already in effect, as the very first “#MeToo” New York Fashion Week show is set for February 9th (along with a mystery Midtown Manhattan show on February 6th), courtesy of Myriam Chalek. According to Chalek, it’s less about the fashion and more about raising awareness for the movement:

“It’s purposefully nonexclusive and open to the public. Models will wear garments that “visualize” their experience of sexual misconduct, and some will speak of their experiences.”

And of course, let’s not forget some of the underdog stories of New York Fashion Week, like that of Sandra Sandor, detailed in The New York Times. She and her boyfriend, Peter Baldaszti, have been designing for their Budapest-based label Nanushka for 13 years, but will be showing their wares at NYFW for the first time this year.

It’s a “do or die” moment, though -- they spent a considerable amount of money to secure a spot at the event and get the models to show off their designs, they also won’t be on the official calendar (new designers are generally relegated to “off-calendar” spots). They’ll need to make everything work for their big debut, something that Sandor is confident she can pull off: “To be honest with you, I don’t think we’re risking anything. I’m quite confident it’s going to be great.”

It will be interesting to see how NYFW shapes up for Nanushka, as well as the other big-time brands that will be in attendance.

Places like Renoir House, one of the Upper East Side’s most elegant rental communities. Here, residents enjoy the pristine location, spacious floorplans, and superior building features, all of which contribute to a level of Manhattan luxury most only dream of.