Take a Look at Temple Emanu-El 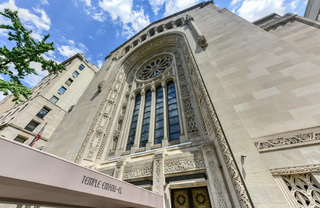 Did you know that one of the world’s largest synagogues is located right in New York City? To be even more specific, it’s not far from the fabulous Upper East Side apartments at Renoir House, and a fixture for the Reform Judaism congregation in NYC. We’re speaking, of course, about emple Emanu-El, the first Reform Jewish congregation in New York, and the flagship for this religious branch. They have a remarkable building located on Fifth Avenue, and it’s a landmark we’re certain you’d be interested in learning more about. Read on, because today, we’re going to be going in-depth on the majesty of this historic New York City site.

What is Temple Emanu-El?

At its most basic, you can think of Temple Emanu-El as a house of worship for Reform Judaism (also called Progressive Judaism). This denomination, in their own words, has “enabled the Jewish people to introduce innovation while preserving tradition, to embrace diversity while asserting commonality, to affirm beliefs without rejecting those who doubt, and to bring faith to sacred texts without sacrificing critical scholarship.” Central to their beliefs are the ideas of inclusion and equality, and are opposed to the concepts of shunning community members based on sex, sexual preferences, gender, and other characteristics. Temple Emanu-El has been a focal point for their beliefs for more than a century, and next, we’ll take a look at some of its history.

How Temple Emanu-El Came to Be

To learn the origins of Temple Emanu-El, we have to travel back to 1845, when immigration to the East of Manhattan was at a peak, and scores of European Jews came to America to make a new life for themselves:

“In the 1840s, the Lower East Side of Manhattan was becoming home to waves of immigrants from Europe, who crowded into the neighborhood’s tenements. It was here, in the second-floor room of a loft building, that 33 Jews started Congregation Emanu-El in 1845.”

Jump forward just over two decades, and those same Jewish immigrants started to amass some wealth. With their newfound capital, they set about constructing “the largest and most spectacular synagogue in America,” at Fifth Avenue and East 43rd Street.

In time, though, this spot became insufficient for the purposes of the temple, so, “in 1927, consolidating with another great city congregation, Temple Beth-El, Emanu-El opened its new home at Fifth Avenue and 65th Street to NYC’s Upper East Side community.”

When it was completed, Temple Emanu-El was the largest synagogue in the world (and still, to this day, holds its own in terms of sheer magnitude). Its Romanesque-revival features help it stand out in the neighborhood, and to this day, it remains a sight to behold should you ever find yourself walking along Fifth Avenue and catch a glance.

Temple Emanu-El isn’t just famous for its architecture and appearance, however. This house of worship is also of great symbolic importance — namely, for the rise of Reform Judaism in the United States. As they state in their history, Temple Emanu-El started performing more traditional services, but “the congregation soon made bold departures from Orthodox religious practice.”

This move, remarkably, birthed the principles of Reform Judaism in the United States, and came with a good number of changes from what was considered an Orthodox Jewish service:

“First, the congregation replaced Hebrew with German during service, and eventually English. In 1848, the temple installed a magnificent organ, and instrumental music became part of the worship experience. The tradition of calling congregants to the Torah was eliminated except for at bar mitzvahs, and holidays like Rosh Hashanah were celebrated for one day instead of two.”

These changes were all extraordinarily significant, but even they pale in comparison to their largest, the abolishment of mechitza — the barrier separating men and women. In doing so, they created a transformative Jewish experience that is still practiced today, and welcoming to individuals across many walks of life.

Temple Emanu-El has more credits in their extensive history. They were instrumental, for instance, in providing Jews in America a place of belonging, and perhaps even aiding in their upward mobility after arriving in the United States. While their leadership has changed hands several times over the years, they remained committed to the spirit of their beliefs, and continue promoting their mission of “humility, warmheartedness and openness to all who come in peace.”

Nowadays, Temple Emanu-El, in addition to serving as a house of worship, is open for tours to those who want to see the check out the majesty of this grand structure. On this point as well, the temple has received numerous accolades, something they aren’t shy in pointing out:

“In 2017, CNN named Temple Emanu-El as one of “8 religious wonders to see in the U.S.” and was included among “The Hallowed Ground of Gotham City” by The Aesthete. Also in 2017, New York Landmarks Conservancy produced this excellent documentary in their series “Tourist in Your Own Town, #50” and offers a wonderful overview to the history, art, and architecture of our synagogue.”

Admission to tour Temple Emanu-El is free, and you can do so from Sundays through Thursdays, 10:00AM to 4:30PM. Before you go, you might want to check out their Self-Guided Tour document, which points out important features of the temple, provides some statistics on the building itself, and provides even greater insight on the temple’s history and significance. If you’d prefer a group tour experience, though, you should-know that docent-led tours are only available for groups of 10 or more, so be sure to get some friends together if you’re after that guided walk around Temple Emanu-El.

Around Renoir House, you’ll find a world of history and wonder — fitting for such a classically-styled Manhattan neighborhood. Here, luxury and comfort are just the beginning, and you’ll find yourself in the midst of a side of New York marked by its grace and sophistication. This is how the city was meant to be experienced. Check out what Renoir House has to offer you, and learn more about calling this community home today.