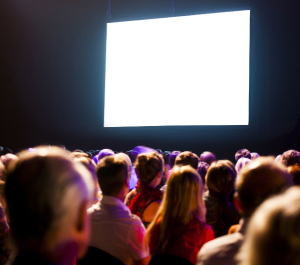 It's that time of year. Every fall, residents pour out of their Manhattan apartments and visitors flood the city from far and wide for the New York Film Festival. This year marks the 55th iteration of the popular event, one of the most popular in the country, designed to bring prominence to quality filmmaking from around the world. There's the well-known "Main Slate," a feature of roughly 20-30 films, but also additional room for "experimental cinema and retrospectives," along with documentaries and other works that might not quite make the cut of what would traditionally be considered your run-of-the-mill movie. What's there to know about this prestigious undertaking? Plenty, and this year might even have some surprises in store for the eager eyes who watch goings-on of this two-week long extravaganza.

History Of The NYFF

It's hosted by the Film Society Of Lincoln Center (FSLC) and was founded in 1963 by Richard Roud and Amos Vogel. Their mission, as stated on their about page, has always been (and presumably will continue to be) about highlighting great works of cinema and amazing talent:

"Since 1963, the New York Film Festival has brought new and important cinematic works from around the world to Lincoln Center. In addition to the Main Slate official selections, the festival includes newly restored classics, special events, filmmaker talks, panel discussions, an Avant-Garde showcase, and much more."

The event lasts for 17 days, and five-person selection committee, composed of Festival Director Kent Jones, along with "esteemed critics, curators, and programmers," decided what gets in and what stays out. There's an air of exclusivity, for certain, but also one of inclusion, as they have also made it their goal to "recognize and support new filmmakers, and to enhance awareness, accessibility and understanding of the art among a broad and diverse film going audience."

As noted by Indie Wire, a nod at NYFF is something of a special badge of honor:

"Passing the NYFF litmus test is a different beast than wowing the well-heeled midwesterners of Telluride or the industry heavyweights at TIFF; playing well at NYFF gives you cinematic street cred, and it’s a blast to sit on that corner to watch the crowds swarm in."
With that in mind, it's no surprise that filmmakers bring their A-Game with the works on display here. What will this year's festival have in store? There will, of course, be premieres of on a grand scale, and while not a strict "awards campaign stop," Variety notes that the goings on of this years NYFF may "help clarify the Oscars field."

This Year At NYFF

There will be plenty of great movies (and many other features) worth their salt. The full lineup, naturally, can be gleaned from NYFF's site itself. The standouts come from the Main Slate, of course, so let's start there. This year will have "25 of the most exciting new feature films from around the world," from the likes of names you may have already heard of (the great Richard Linklater, for instance), to those you may not have (such as Greta Gerwig, in her directorial debut).

Variety points out that Linklater has had previous success getting to the Oscars in the past. His film showing at NYFF, Last Flag Flying, is itself stocked with former Oscar nominees (Bryan Cranston, Steve Carell, Lawrence Fishburne), lending it a great deal of heft and credibility. As for the film itself, it's a "dramedy about aging Vietnam vets reuniting after many years to attend the funeral of one of man’s son, who was killed in the Iraq war." As one might expect from a film with such weighty subject matter, it goes into the valor of serving in the military while still raising the important questions about the necessity of war. Just the kind of thought-provoking content one would expect from a lineup of this caliber.

Then there's that directorial debut we touched upon. Lady Bird, by Greta Gerwig, explores the life of "an artistically inclined young woman (Saoirse Ronan) trying to define herself in the shadow of her mother (Laurie Metcalf) and searching for an escape route from her hometown of Sacramento." Based solely on that description, you might expect a moody masterpiece, and, if critical interpretations are to be accepted, you'd probably be right. They point out, however, that this film goes for more than what would be considered typical of this genre:

"Gerwig is going for something deeper. She defies what we typically get from a complicated female protagonist and asks us to examine our expectation that a young woman needs to be, essentially, nice before she can carry a film."
That last bit is important. The main character can easily be interpreted as unlikable:

"Lady Bird is difficult to like, and maybe that’s the point. Gerwig has written a main character who’s angry, frustrated and aching to have people recognize the genius that brews just below the surface."
And that's quite alright. Not every protagonist needs to be heroic, and adding a rough edge to a main character, some human flaws that most everyone can relate to, makes for an interesting watch.

Which, some might argue, is the point of NYFF. The offerings here aren't typical, and they run the gamut in terms of where the films were made, who produced them, the themes they cover, and the characters that they portray. By bringing in so much diversity, NYFF does credit to highlighting the best from all over, and this year's festival, like the many that came before it, will be a great opportunity for audiences to see the art of filmmaking in its truest form.

Can You Believe It's All Near These Manhattan Apartments?

Residents of New York are treated to all kinds of great events like NYFF. If you'd like in on the action, you'll do well to find yourself a place in the city, like stunning Renoir House, the "quintessential New York City rental experience." From a coveted spot on the Upper East Side to luxurious rental units and a building packed with modern conveniences that epitomize the good life, Renoir House is everything that living on Manhattan is intended to be. See for yourself why this is considered one of the finest offerings on the entirety of the island.