Things to Do in Lenox Hill: Our Neighborhood Guide 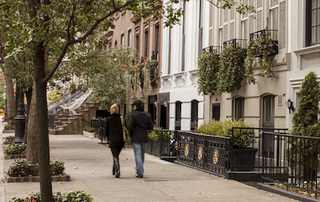 Lenox Hill is an upper east side neighborhood in Manhattan, New York City adjacent to the Southside of Central Park.

Once a large farm, way back two hundred years ago, this neighborhood is now in the bustling heart of one of the biggest cities in the world. What was once land growing crops has since sprung skyscrapers and cultural havens. Here, you are in true city, with towering buildings and bustling streets as soon as you walk out your front door.

The boundaries of this neighborhood are debatable, but are generally considered to be between E 77th St and E 59th street, bordered by Central Park to the West and the East River on the East.

From Renoir House Apartments, you can get to any part of Lenox Hill within a 15-minute walk, making it a convenient spot for accessing all Lenox Hill has to offer, from access to the best section of Central Park (in our opinion) to incredible shopping and cultural centers.

Central Park, one of the greatest parts of Manhattan, is also one of the best parts about living in Lenox Hill. Imagine going for a run in the morning through the greatest park in the world, or taking your dog for a walk and letting them sniff the gorgeous seasonal fauna just down the street.

Though all of Central Park is quite accessible, Lenox Hill is adjacent to the Southeast section, which is full of family-friendly activity and beautiful views.

A fixture since 1864, the zoo and the children’s zoo include a variety of animals organized by climate zone. Rare monkeys, birds, turtles, bats and even a penguin house populate this historical menagerie.

This infamous arched stone bridge offers gorgeous views in every season. If you’re not sure you’ve seen it before, you probably have because it’s featured in every movie from Home Alone 2 to The Devil Wears Prada.

A fabulous out-of-the-way woody area of the park with dirt trails, this is a great spot for getting away from the noises of traffic and the sight of concrete while living in the city.

One of the oldest structures in Central Park, this rustic, wooden gazebo-like structure is ideal for contemplative thoughts or romantic dates. Often used as a wedding location, this structure is surrounded by tress and is quite quaint.

If you want to join the infamous New York City elders playing chess in the park, this is the spot to go. It also offers lovely views to stare at while contemplating your next move.

This iconic attraction opened in 1871, and has gone through many iterations — from being operated by underground mules to steam-powered to the contemporary version. This is another spot that’s visible in many movies, including Up The Sandbox and The Producers.

You’ll be grateful to live so close to this expansive adventure park with elaborate structures, swings and slides, a water-play area, and acres of space to safely run around. This is the largest playground in New York City.

Featuring ice skating throughout most of the year and roller discos in the summer, Wollman Rink has attracted skaters of all ages and abilities for years and years.

Lenox Hill is a haven for high-end fashion and luxurious, timeless stores. Some of the most famous stores in Lenox Hill include, but are not limited to:

It isn’t New York City without some of the greatest cultural centers and museums in the world. While Lenox Hill gives you easy access to everything in Manhattan — with The Met and The Guggenheim not too far off — you’ve got plenty right in Lenox Hill.

Park Avenue Armory is an incredible Gothic Revival building from 1880 that currently serves as a space for nonprofit ventures, including art displays.

Asia Society and Museum is an incredible, long-standing educational institution that hosts many community initiatives and also has a public museum to learn more about the peoples of Asia in a global context.

Society of Illustrators is a nonprofit educational institution that promotes the art of illustration as well as hosting exhibitions for the public to view important illustrative work.

Barnard Museum is attached to the Temple Emanu-El. It hosts exhibits that educates the public on aspects of Jewish culture and faith.

The Frick Madison Museum displays the extensive art collection of Henry Clay Frick, who had works from the Renaissance period and also periods up until the 19th century. The collection has continued to grow after his death. It also operates as an important art history research center.