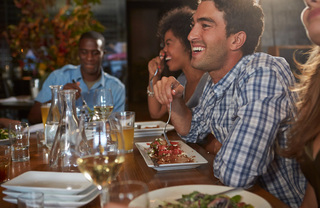 With Museum Mile Festival coming up soon, you’ll have plenty of reason to trek from the apartments for rent in Manhattan down to this particular stretch of road in the Upper East Side, and during (or after) the festivities, you’ll likely have built up an appetite and will be looking for a place to chow down. We’ve got you covered, because today, we’ll be taking a look at some of the best eating in and around Museum Mile, and giving you some ideas on where to grab that post-festival meal.

Sarabeth is a name that most native New Yorkers have at least heard of, and even a few out-of-towners are familiar with. This popular (and critically acclaimed) collection of restaurants began in 1983 with that first location on the Upper East Side, which just so happens to be within striking distance of Museum Mile, between 92nd and 93rd Streets.

In terms of style, this is a casual dining joint that serves mostly American cuisine, and they’ve had more than 30 years to fine tune their menu for maximum diner enjoyment. Whether it’s breakfast, lunch, or dinner, they’ve got options to fit most tastes (including vegetarians), in a cozy city environment that’s part of the fabric of the neighborhood.

If you’re just after a good cup of coffee (and maybe a little bit more), then Bluestone Lane’s Upper East Side location might be just right for you. They made quite the splash when first opening up, renting out The Church of the Heavenly Rest on East 90th Street for their establishment. This, according to General Manager Gianna Lott, was all part of the plan to enhance the cafe’s inimitable style:

“I think it's one of the most unique cafes in New York City, let alone in the United States. Not many can say they're located inside a church as beautiful as this one. We had an amazing canvas to work with. It's just grand.”

The experience here is authentic Australian. The coffee is roasted in Melbourne, and all menu items are made in-house, by a staff that is predominantly Australian as well.

Those menu items, by the way, are numerous, but include some light eats that you might be interested in, including signature dishes like the gluten-free Banana Bread topped with whipped ricotta, toasted pecans, fresh banana & berries, Avocado Smash paired with tahini, heirloom tomatoes, sprouts, feta and lemon, topped with a delicately poached egg, and the house-made granola w/ fresh berries and citrus curd.

You can get a closer look at Bluestone Lane’s UES menu here, and should definitely check out the feature on this establishment in Architectural Digest to learn more about the historic location and its unique design.

When you’re in the mood for a fancy French bistro, Table d'Hote is the spot that delivers near Museum Mile. Located on East 92nd Street at Madison Avenue, this establishment made Gothamist’s 2016 list of the 16 Best Underrated Brunch Spots in NYC, which noted that the higher-than-average prices here were offset by the restaurant’s great food and upscale atmosphere:

“This hidden Upper East Side gem isn’t necessarily as cheap as some of the other places on this list. But what it loses in economy it saves in ambiance, plus you get complimentary muffins before your meal.”

They’ve got the “French Country” style down to a science here, and you’ll enjoy the setting and service just as much as the great food. They’ve been around since 1978 for a good reason, as you’ll soon learn when you take a trip to this lovely, petit eatery.

Since it’s located right within the Solomon R. Guggenheim Museum on 5th Avenue, you can head to the The Wright if you plan on making this part of your tour of Museum Mile. Much like the museum itself, The Wright is an extraordinary work of art, mimicking the building it’s housed in with its white swirls and colorful installations.

They’ve got their accolades here too. Since opening back in 2009, The Wright earned the 2010 James Beard Award for Best Restaurant Design and has also racked up a coveted 20+ rating over at Zagat.

No list of New York restaurants would be complete without a nod to some fine Italian fare, and for this compilation, we’ve selected Ristorante Morini as your go-to if you’re heading to Museum Mile. Back when it opened, publications like the NY Post wondered how long this endeavor would remain a part of the neighborhood:

“Will it last? The last restaurant on the site, Centolire, started out with a bang in 2001 but lost energy long before it lost customers.”

It seems Morini has withstood the test of time for now, as they’re still going strong and serving up all manner of lunch, brunch, and dinner favorites, along with a hefty dessert menu, a stacked bar, and more wine than you can shake a stick at.

Most who grace the doors of this lovely establishment consider it something of an upscale wonder in the Upper East Side, helmed by celebrity chef Michael White, and complete with passionately-prepared dishes that should be the envy of other restaurants looking to make an impact.

If these hotspots sound like your kinds of hangouts, you’ll be pleased to learn that stylish apartments like Renoir House put you right near all the wonders of the Upper East Side, and house a few wonders of their own to boot. It’s hard to find luxury and comfort like you’ll see in this community, yet it’s all there for you to enjoy at Renoir House. Step inside, and experience the Manhattan lifestyle the way it was meant to be.